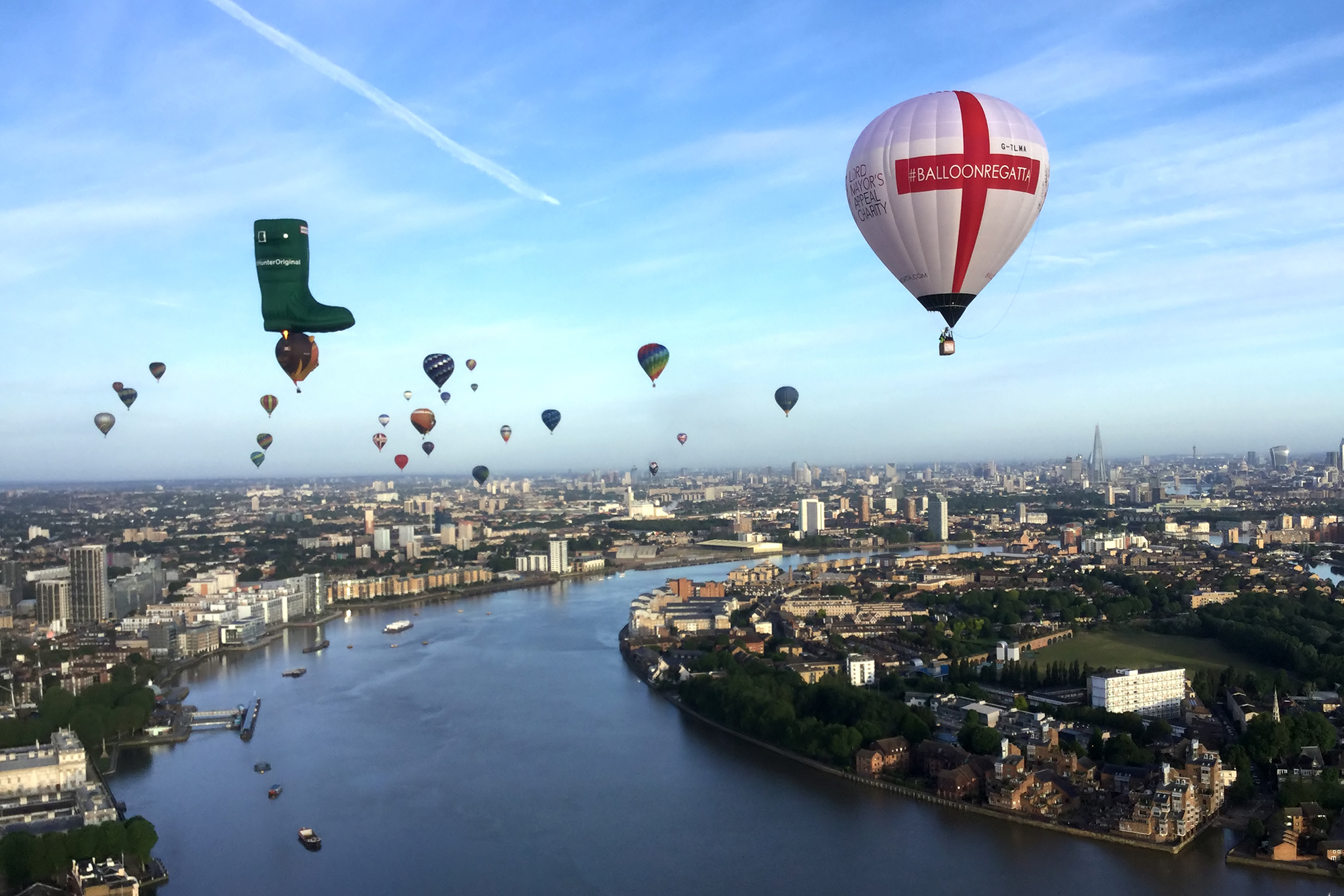 In an awe-inspiring display, 46 balloons took off en masse from Battersea Park at 5:15am this morning, the first-ever launch of its kind from this location. With the CEO of The Lord Mayor’s Appeal on board, the balloons flew over many of the city’s most famous landmarks, including the London Eye, the Houses of Parliament, Cutty Sark, Greenwich, Canary Wharf and Thames Flood Barrier.

The Lord Mayor’s Hot Air Balloon Regatta® is quickly becoming a standout feature in London’s calendar and the annual event has raised an overall total of £251,724 to date with £76,000 being raised this year alone. The funds raised for The Lord Mayor’s Appeal will support three inspirational charities: Samaritans, OnSide Youth Zones and Place2Be.

Founded and organised by the world’s leading aerial marketing specialists, Exclusive Ballooning, the Balloon Regatta® has been running since 2015 and has received continued support from headline sponsor RICOH along with the City of London Corporation.

Alderman Peter Estlin, Lord Mayor of London, comments: “The Lord Mayor’s Balloon Regatta® is quickly establishing itself as one of the cultural highlights associated with the City of London, creating breath-taking views across the capital’s iconic skyline. It brings together charity, community and commerce, everything that the City – and the Lord Mayor – is all about.

“Every year, the event raises awareness and money for The Lord Mayor’s Appeal charities. Over the next two years, the Appeal is focusing on three organisations: Place2Be, OnSide Youth Zones and Samaritans. All this work – supported by the Regatta, RICOH and other corporate partners – will work towards one aim: to build an inclusive, healthy skilled and fair City – A Better City for All.”

Andrew Holly, Operations Director and Balloon Regatta® Flight Director at Exclusive Ballooning, said: “We set up the Balloon Regatta® in support of The Lord Mayor’s Appeal as it was the perfect blend of London ballooning and charitable causes. Since our inception, we have used all resources available to us in order to help our clients raise money for charity. We are proud that so far, we have helped our clients raise over £8,000,000 for charity using hot air balloons.”

Chas Moloney, Marketing Director, RICOH UK, comments: “The Lord Mayor’s Balloon Regatta® is a testament to our continued commitment to empowering positive and sustainable change for people. Working with The Lord Mayor’s Appeal enables us to make a real difference within the communities of London, helping support charities and local businesses that tend to all facets of life – from mental wellbeing, to healthcare and technological growth and education. We take pride in helping drive these initiatives using our expertise and expect this year’s Regatta to highlight the phenomenal work and success achieved by all involved”.