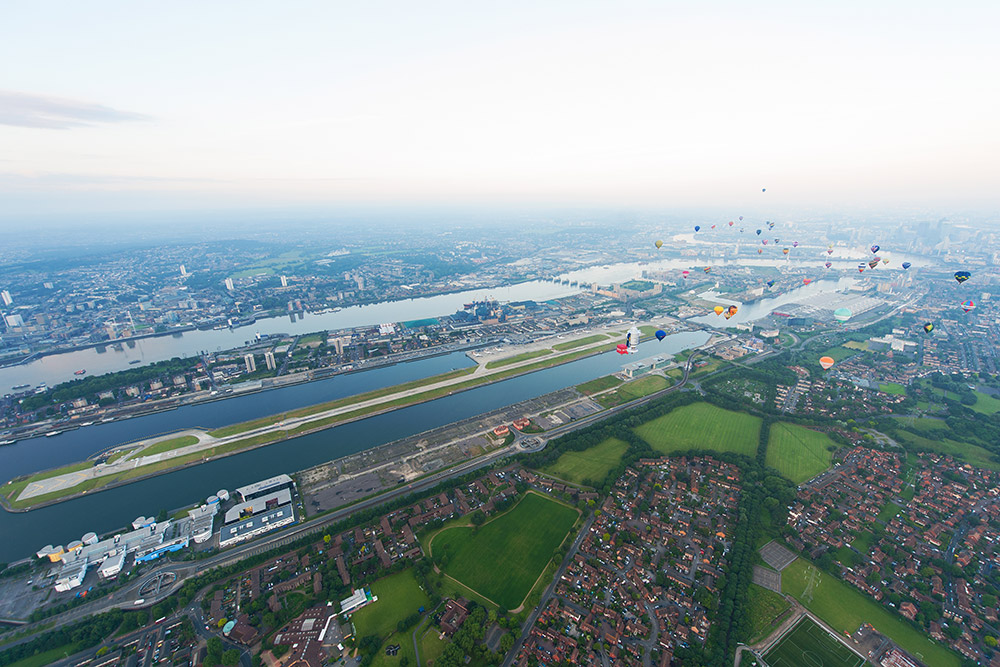 London City Airport will accommodate the first mass cross-London flight to launch from a major airport, when it plays host to the annual Lord Mayor’s Hot Air Balloon Regatta® in June this year.

The official ballooning event of The City of London, which is being staged at the airport as part of its 30th anniversary year celebrations, will see more than 50 hot air balloons taking to the skies – the highest number recorded departing from a UK international airport. During the 15-minute launch period, London City Airport is likely to be one of the busiest international airports in the world, based on the number of ‘movements’.

An international array of hot air balloon pilots from the UK, France, Spain, Belgium and the USA are set to attend. London City Airport has also commissioned its own hot air balloon to join the extravaganza, affording Londoners spectacular views of the colourful display.

Declan Collier, CEO of London City Airport, said: “We are looking forward to hosting this extravaganza on our runway, providing a unique setting against the backdrop of London’s Royal Docks, the River Thames and the iconic London skyline nearby. The regatta will provide our local communities with a 30th anniversary spectacle they’ll never forget.”

The regatta recreates the first ever balloon flight which took place in Britain in 1784, by pioneering Italian aeronaut, Vincenzo Lunardi.

An aerial extension of the historic Lord Mayor’s Show, the regatta is designed to raise awareness of and funds for the Lord Mayor’s Appeal. The Appeal supports hospital and community outreach through music, working with St Paul’s Cathedral and the London Symphony Orchestra.

“The Lord Mayor’s Balloon Regatta is the very highest of highlights – celebrating the tremendous contribution of business to their communities, 1000 feet above London!

“The Regatta raises funds and awareness for the Lord Mayor’s Appeal, through the work of the London Symphony Orchestra Discovery programme, St Paul’s community projects in East London, and Music in Hospitals.

“We owe a particular debt of gratitude to Ricoh for their generous three-year support and to London City Airport for providing the perfect launch site; an uplifting celebration of their 30th anniversary. Thanks to them and all the other organisations taking part, thousands of young people will be supported, and Londoners will enjoy a stunning sight this June.”

Due to the weather-dependent nature of hot air ballooning, this event is on standby for every Sunday morning in June and will proceed on the first available of these dates when the weather is suitable.

The Lord Mayor’s Hot Air Balloon Regatta is brought to life by Exclusive Ballooning, which has helped to raise more than £7 million for charity using hot air balloons at the tool for fundraising.

London City Airport was officially opened by HM Queen Elizabeth II on 5 November 1987, and throughout 2017 is celebrating its 30th anniversary year.

As part of a longstanding arrangement with the local community, London City Airport closes every weekend from Saturday lunchtime until Sunday lunchtime, therefore usual flight operations are unaffected by the Regatta.