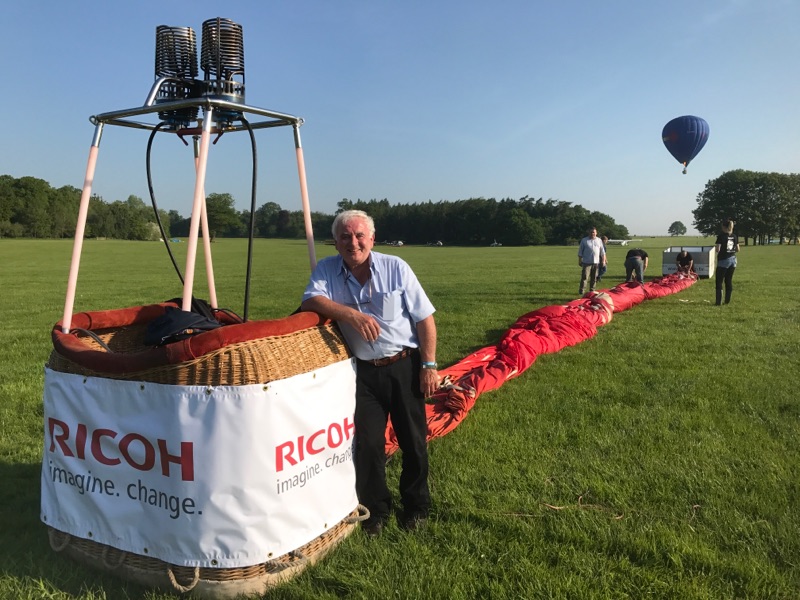 It was a sad day for Exclusive Ballooning, as we said goodbye to one of our (and the worlds) most experienced commercial balloon pilots; Malcolm Campbell.

Malcolm gained his pilot’s licence in 1974 and started flying commercially in the 1980’s. He has tethered and flown some of the largest special shapes in the world, including Thomas the Tank Engine, Douglas Lurpack and our very own giant Pirate Ship!

Malcolm has flown in over 150 different balloons, most of which have been special shapes, and has flown in 27 different countries, including the UAE, New Zealand, Philippines and various states in the USA.

For the last five years, you could find Malcolm in his favourite balloon; our imagine.change. RICOH special shape cube. He has taken this balloon all over the UK and flew this for the last time at the Midlands Air Festival.

Throughout his career, Malcolm has collated an incredible and very impressive total of 8500 hours in a balloon! 4500 of these are free flying and 4000 have been tethering various balloons. He is certainly well known for his hard work ethic but also for his unshakeable professionalism no matter the weather or size of balloon! But then having spent the equivalent of 24/7 non-stop for one whole year of his life in a hot air balloon, you would expect not much to faze him!

We asked Malcolm about some of his most memorable moments and the list was very long but one flight that stood out as flying from Guernsey to Mainland UK. It took four hours and eventually they landing in raining! Malcolm also recalled his fastest landing at 20 knots but thankfully there were no broken bones!

The Exclusive Ballooning team will miss Malcolm and are grateful for all his hard work. The RICOH events won’t be quite the same without him. He plans to now fly privately for actual fun, spending more time with his family and we wish him all the best!